Founder Perception Entrepreneurs See What Others Do Not

By Will Keyser
Posted April 6, 2018
In Benefit Venture Blog, Entrepreneurship, Insights
Founder Perception Entrepreneurs See What Others Do Not2018-04-062018-11-17https://venturefounders.com/wp-content/uploads/2018/03/logo-venture-founders-600w.pngVenture Foundershttps://venturefounders.com/wp-content/uploads/2018/03/logo-venture-founders-600w.png200px200px 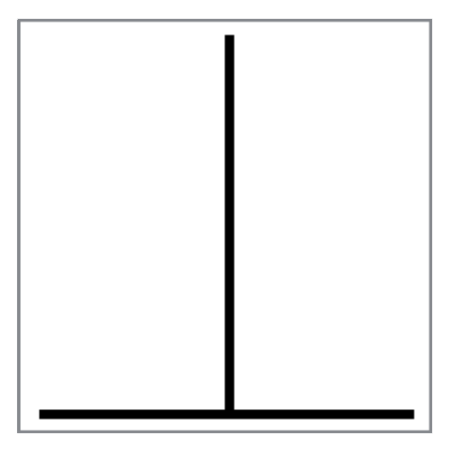 Founder Perception: Clearly successful entrepreneurs see things that others do not. Not surprisingly we tend to have differing perceptions of things, but the key to a winning new venture is being awake to opportunities and how you intend to meet the implicit needs or wants.

For instance take a look at the picture to the right:

Which line is longer?

I expect you answered the vertical, unless you already know about the Müller-Lyer illusion, named after a nineteenth century German sociologist—especially if you have good founder perception and natural intuition. If you did, you’d have given the right answer immediately, which is that both lines are the same length.

However, chances are high that you did choose the vertical. That would have been intuitive. A good entrepreneur would be happy with that choice, but would also have remained skeptical until a measurement was taken—that’s founder perception at work. A bit of reflective intuition and checking the facts would have soon reversed the choice to the correct answer.

Entrepreneurs love going with their intuition, but this is combined with the ability to evaluate options. Founder perception allows them to see both the upside and the downside. Don’t be fooled—by comparison with managers they may seem impulsive, but what is critical for them is the evaluation of risk. Their resources are either their own or ones for which they have a high degree of responsibility. Hence, conversely to the popular idea that entrepreneurs are defined by their ability to take risks, they always take only calculated risks, always except of course, the unsuccessful founders

According to a 2017 study by CPP Inc., a firm that publishes the Myers-Briggs Type Indicator assessment, there are two top personality traits of entrepreneurs: intuition and perception (grasping the meaning by means of the senses or of the mind; cognition; understanding). Individuals with a preference for intuition are significantly more likely to become entrepreneurs than those who have other personality traits like sensing or judging, according to the firm’s findings. I can confirm this as an entrepreneur, being both an iNtuitive and Perceiving type in Myers-Briggs terminology!

When I started my main business, I was working in a business school and had lots of very well qualified management teachers around me. Almost all of them thought that my business idea was terrible, because we were seeking to to offer something that went against the professional grain. What I saw was an opportunity both to increase effectiveness and reduce cost. I was sufficiently farsighted to see beyond the stars quo.

There are many other parts of the Venture Founders site where you’ll find related items to read about what makes a successful entrepreneur: