Entrepreneurs Are Builders Putting Things Together

Entrepreneurs Are Builders: The word ‘entrepreneur’ is derived from the French verb, entreprendre—to undertake in English.

So, an entrepreneur is someone who undertakes things, but in English, we talk about undertakers as being those who deal with funerals. In colloquial French, on the other hand, ‘un entrepreneur’ is generally a builder—who put things together. Building a venture is what an entrepreneur does. We would do well to think of entrepreneurs as builders. They use their powers of synthesis to understand all the components of building and put them together.

However, for too long, the nation’s top business schools and Wall Street have perpetuated the idea that all entrepreneurs are people who have brainwaves, dream up mission statements, produce fat business plans, make pitches to raise seed and then venture capital, take action to boost the value of the shares issued… and then seek an exit. The people who do this are generally white males, who are financially propelled and relatively few in number, in fact only one thousand and one, in 2020, according to SiliconAngle. There have only been 301 ‘Unicorns’1 in the US, according to Crunchbase. The odds of a startup achieving $1 billion valuations are less than 1%. The overwhelming numbers of new ventures demonstrate that entrepreneurs are builders.

Of course every definition of an entrepreneur is wrong to some extent, because no two founders are alike. Have a look at my own take on being an entrepreneur.

Entrepreneurs Are Builders of Businesses

In reality, the vast majority of entrepreneurs are builders of businesses, and there are many more of them and they are more diverse, than those simply aiming at outsize financial returns and speedy fortunes. In 2020, there were 4.35 million new business applications, according to the US Census Bureau. From a low point in the middle of the Covid Pandemic, they surged back to more than half a million in July 2020, the highest monthly figure in many years. In any event, 75% of VC funded startups fail! It’s true, too, that 50% of all startups fail in the first two years.

It is estimated that over 60% percent of adult Americans (18-64) consider that they “personally have the knowledge, skills and experience required to start a business”2. The same study showed that the largest age group of entrepreneurs starting their firms in 2020 were aged between 35-45.

This gives a very different idea about what constitutes an ‘entrepreneur’, than the one that Silicon Valley hype would have you believe. Of course, 198 million Americans are not going to open businesses in the near term! However, very large numbers of mature Americans will create enterprises of different kinds. According to HBR, the average age of entrepreneurs at the time they founded their first companies is 42 (I was 43).

Many, maybe even most, of these new ventures will be put together by people with available resources, without seeking outside skills or finance. To borrow another French word, they are bricoleurs3, or tinkerers, as I would translate it into English. Finance is not the exclusive key to success in business.

Entrepreneurs Are Builders: My Own Experience 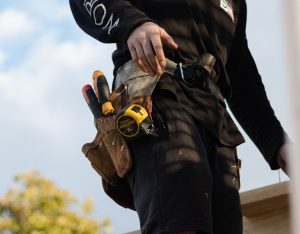 I am not a builder of houses or any other structure. On the other hand, from the year before my startup and during its early stages, building was exactly what I was doing.

The tools of the business were simple, just like those on a builder’s tool-belt. They were also close at hand. They had to be so that they could be used as needed. There was a plan, like an architects blueprint, but it was modified as we learned by experience. Maybe I had some inherited entrepreneurial traits.

My family background is entrepreneurial: on my paternal side it was merchant banking. A Keyser & Co, a merchant bank in the City of London was founded 1868. The family sold out about 100 years later and the company disappeared in the banking crisis of 1973. On the maternal side it was rope-making. Hutchison & Pollok, was founded in the City of Liverpool in 1896; my second cousin was still there until the 1950s, but the company disappeared in several takeovers, ultimately by a Belgian company.

Having been an entrepreneur myself, it’s hardly surprising that three of my kids followed suit. My main venture was the furthest you can get from a startup unicorn. We sold the business to our 30 or so employees at the end of 11 years, for the princely symbolic sum of one pound sterling. In the end the business did not last too long after the sale; and it interesting to me that not one of the organizations I worked for over 50 years or so actually exists today. In addition to my own startup, the list includes several other small firms, a multinational, a government agency and a nationalized industry, the college where I taught new venture creation.

Impermanence of Buildings and Businesses

I see entrepreneurs as builders, like any modern builder. They construct for the conditions of the time—not forever. They build what’s appropriate for the needs of the moment. Archaeologists continually find ancient ruins, whose purpose remain mysterious or has been superseded over time. Sometimes the buildings fall down or become so dilapidated that they no longer serve their original usefulness.

However the great learning is that we build for the needs and wants of now, not perpetuity. Who needs a typewriter today? A horse and cart was vital to my family in England during WWII. There’s a TV program about remodeling houses; they refer to their clients’ ‘forever homes’. A more appropriate definition might be ‘lifetime homes’. Even one of the four Egyptian pyramids has vanished.

Businesses are inherently impermanent, but that is no reason not to build them. We build them for the needs and wants that we have analyzed. The synthesis is what keeps entrepreneurs perpetually building.

3. To digress briefly, I spent my eighteenth year as a laborer on a peasant farm in the Loire Valley in France, in the late 1950s. My employer Monsieur Delahaye was an astute business person, feeding ten children from less than 100 acres. We sold many different kinds of farm products, both grown and manufactured; the only groceries we purchased were pepper and salt, coffee, olive oil, candles—the kinds of products we could not produce.

Monsieur D and his family were bricoleurs. We were not profligate with the resources we did have. Work was done by hand, if necessary using a hand tool, at a push, Sultan (the workhorse) would be harnessed to the plow to till the vines or to the cart to bring in the harvest (much harder than entrepreneurship, as I discovered). If things broke, we fixed them. We collected the snails from the garden for a treat. We grew tomatoes on the dung heap. We sold things in bulk, by the liter or the kilo. We shared heavy implements with others. It did not stop us using the latest equipment. For instance, a combine harvester (this was 1954) probably cut corn for 20 small farms.