Small Entrepreneurs Have Global Impact: If you are Don Miguel, of Fincas Familia Castro, a small family coffee plantation and roasters, in San Pedro de Poàs, about an hour north of San José, the capital of Costa Rica, you might not think that you could have a global impact. You could also be wrong. Don Miguel knows that he is part of the world community; not just San Pedro. 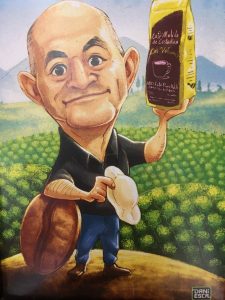 Entrepreneurs frequently struggle to stay in business, let alone to have any influence, but in today’s interconnected world their actions can be appreciated on a wide scale.The world is facing three existential crises: climate, inequality and democracy, according to Joseph Stiglitz, Economics Nobel Laureate.

In the case of Don Miguel, he’s a leader in the whole agricultural region of Alajuela. Not only does he want to pass on his business to his children (as his forbears did to him), but to make the plantation sustainable (in agricultural, economic, social and environmental terms) and contribute to Costa Rica’s ambitious goal to become ‘decarbonized by 2050.

If you were to visit the finca, you’d see nothing wasted. The shade grown coffee plants’ prunings are composted and used to fertilize the following year’s production. The water he uses to wash the bean (or, cherries) is used for irrigation. He uses no chemicals. He provides good housing and fair wages to his workers, who often travel down from Nicaragua for the harvest. He does not need to hear Stiglitz; he acts according to his deep felt sense of purpose.

Don Miguel has not been acting alone. He has had support from the UN! That support and partnership has been through NAMA—Nationally Appropriate Mitigation Action which is a set of policies and actions that countries undertake as part of a commitment to reduce greenhouse gas emissions. These policies and actions go back to 1992 when countries adopted the United Nations Framework Convention on Climate

The NAMA Low Carbon Coffee Costa Rica is a program that started in 2015 and finished in 2019. It had sections on sustainable coffee production, low emission coffee milling (using the waste product of the process as a biofuel fuel the roaster), measurement, market support and micro credit. Complex! This public/private program involved action locally and was funded by the German Government, initiated and guided by the UN, supported by the Costa Rican Government. It involved 39 producers and millers across the country… of which Don Miguel’s Café Los Volcanes was one.

Don Miguel could be described therefore, as an impact entrepreneur. There is no common definition of ‘impact entrepreneurs’, Without being someone carrying a banner or calling himself and impact entrepreneur, he is the kind of person who makes an impact, without claiming to do so. He acts from his heart. However his small enterprise, his fellow entrepreneurs and the public bodies who support and encourage them, make a significant collective contribution to the 2050 target

Don Miguel acts in line with his deeply held convictions about how his business can contribute to diminishing global warming. His Los Volcanes coffee brand will and does have an impact on his fellow coffee producers in the NAMA program and others who are not. Costa Rican coffee makes up only about 1% of world production, but has huge cultural importance in the country, having been the generator of the modernization of the country after WWII. The behavior of the industry is watched closely by coffee producers overseas, and is a source of pride in Costa Rica.

Costa Rican Coffee sells at a premium. In fact, Costa Rican coffee is one of Starbucks Premium Select Collection. Costa Rica is the only country in the world where it is 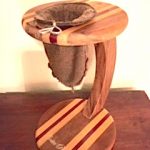 actually illegal to produce any type of coffee other than 100% Arabica—the highest quality there is. Almost all coffee in the country is harvested by hand.

Indeed the very making of coffee to drink is something I learned from Don Miguel. He uses a chureador, and indeed so do I since my visit. No machinery, all natural and the filter is a replaceable cloth bag. The process is as natural as can be. Mine (pictured right) is a one-cup chureador, but obviously you can get bigger ones.

Coherence of one small entrepreneur’s story

Why so much detail? It is to give you a sense of the coherence of the ‘story’—Don Miguel’s story. To be effective yours has to be coherent, also. A coherent story is vital to successfully achieving change. Don Miguel’s story makes sense of who he is, his actions and his commitment to make a contribution to leaving ‘his neck of the woods’ in a better state than the one he inherited.

Big corporations attract a lot of attention by making big claims about how they contribute to society,

although sadly they put little effort towards ensuring that actions are consistent with claims. Small ventures can fall into the same trap if they are not abundantly clear about their fundamental purpose and see that it is matched by actions.