Nearsourcing: Nearsourcing is a way of outsourcing that brings subcontracted services nearer to the client company. Nearer can be in terms of distance, time, language, or culture. Nearsourcing makes particular sense for startups and small firms. They make increasing use of outsourcing for many of the business functions where they lack the expertise or resources, and to save money—the top reason.

My advice to entrepreneurs is to hold off taking on staff for as long as they can, since so many fail from no experience of hiring. Fixed overheads (staff costs are a big part) are frequently the reason for cash flow stress at the early stages of the venture.

Starting a business that has misjudged the market accounts for nearly half the early failure of startups. About a third of failures are due to cash shortage. Nearly a quarter stem from not having the right team. Those clear-sighted entrepreneurs who decide to find outside specialists risk buying simply on price. This can be disappointing, especially when communication between client and contractor are compromised, whereas nearsoucring has a significant advantage in addition to cost: mutual understanding and accessibility.

Apart from being close to the US and a very stable democratic country, English is the second language of Costa Ricans. Four years ago, the Government created an Alliance for Bilingualism to support its strategy to improve the standard of English teaching, considered “a national priority” and an “historic change” that acknowledged the role of English language proficiency in fostering employment and economic growth.

Costa Rica has a population of about 5 million people. The country is strong in the technology sector and tourism (especially eco-tourism), as it diversifies from agriculture. More than 300 multinational companies operate in Costa Rica. Outsourcing rates for Costa Rican services are often half, or less, of US hourly rates, particularly in web design & development.

For those wanting to combine business with pleasure, visiting Costa Rica is easy from the North America. There are more a dozen US cities served by direct scheduled flights to Costa Rica. In addition since Costa Rica is on Central Standard Time, so is well placed to work with client offices in most American cities. Flights between Costa Rica and 28 US cities are operated by seven US airlines. 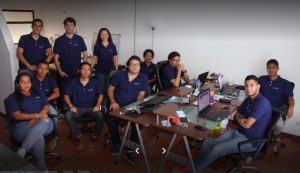 Venture Founders is nearsourcing its web development to Unidad22, a long established firm in Costa Rica. Costa Rica does not figure in the top 10 outsourcing countries. Much to my surprise, given the many advantages it offers for American companies. Statista estimates that by 2025, the global IT outsourcing business will be worth nearly $400 billion (one third to India).

Unidad22 is an outstanding web design and development service for US business. Founded in 2003 by Emer Harkin in Liberia, the country’s second city, her firm is now one of the leading web design firms in Costa Rica. Liberia lies in Costa Rica’s beautiful Pacific coastal Guancaste region on the Inter-American Highway in the north east of the country.

Emer is an Irish woman from Donegal and leads a team of English and Spanish speaking designers and programmers in her business. Her skills are many, but relating and responding to client needs tops the list.

Apart from Venture Founders, an example of a US clients, last year Unidad22 created a system for hospitals in Atlanta, Georgia: the website gives you access to check the status of a particular hospital in metro Atlanta. You can see it in action here. For them nearsourcing has worked well. Proximity means that US clients have been able to spend time in Costa Rica with the Unidad 22 team building close professional relationships.