Rewriting the Rules of Business Founders Lead the Way, Without Waiting for Politicians

By Will Keyser
Posted November 8, 2018
In Benefit Venture Blog, Entrepreneurship, Leadership
Rewriting the Rules of Business Founders Lead the Way, Without Waiting for Politicians2018-11-082022-12-06https://venturefounders.com/wp-content/uploads/2018/03/logo-venture-founders-600w.pngVenture Foundershttps://venturefounders.com/wp-content/uploads/2018/03/logo-venture-founders-600w.png200px200px

Rewriting the Rules of Business: Most governments support the existing unreasonable and unfair way we organize our community social and economic affairs. On the other hand many new venture founders are making change happen, without waiting for the system to be redesigned. They are supported and goaded into action by many writers and activists. Outstanding among them is the Nobel prizewinning economist Joseph Stiglitz. His 2016 book, Rewriting the Rules of the American Economy, stresses that “Wealth begets power, which begets more wealth.” 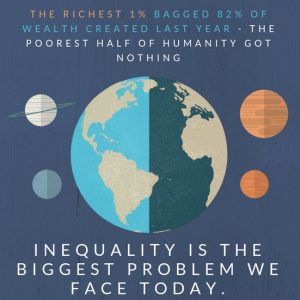 Thanks to Yunus Social Business for the image: YSB is a philanthropic venture fund.

The Stiglitz agenda for taming the top and growing the middle should suit both right and left in politics, because the ultimate beneficiaries will be all of us, rather than the present system, which favors a minute minority. “The vast majority of Americans—not just the poor—are deeply worried about the basics: getting their kids a decent education, bringing home a paycheck that can put food on the table or pay the bills, saving enough, so that one day they can retire,” he says.

Too many of us abdicate responsibility and are leaving it up to politicians to ‘fix’ the problem. What’s interesting to me is that a new breed of business founders are not waiting for ‘them’, understanding that we all have to make our own future. There is actually no battle between socialism and capitalism. There is no ‘us’ and ‘them’, we are all mutually interdependent. This interdependence is why, for instance we all contribute to roads, education, defense, and policing.

New entrepreneurs are the leaders of change resulting in the rewriting of the rules of business. Politicians will catch up eventually. One example is the creation of new forms of company structure. Many States have enacted new legislation of different forms of corporate entities. The L3C is a legal form of business entity in 12 States so far that bridges the gap between nonprofit and for-profit investing by providing a structure that facilitates investments in socially beneficial, for-profit ventures by simplifying compliance with IRS rules for program-related investments, a type of investment that private foundations are allowed to make.

If we burden our professional workforce with insurmountable student debt burdens and, as employers, we don’t help pay for education of our people, or we fail to empower workers to participate in the decisions that impact them, we all lose. The measurement of success should not simply be about output, it should focus on outcomes as well. Piling up assets in the hands of few is a road to ruin.

New entrepreneurs tend to be much more aware of the downstream consequences of business actions that do not produce value for all stakeholders. They are better equipped to assess impact of their actions upon others. They also are aware that being concerned with mutual benefit is likely to produce better benefits for themselves, too, as they one-by-one rewrite the rules of business.

The US-based B Corporation movement is a strong force in support of purpose-driven ventures and is now operating in 60 countries. Certified B Corporations are a new kind of business that balances purpose and profit. The biggest drive is through smaller and entrepreneurial ventures, though now the movement is spreading to the corporate world (I should declare that my own company was a founder BCorp in 2012). They are required to consider the impact of their decisions on their workers, customers, suppliers, community, and the environment. This is a community of leaders, driving a global movement of people using business as a force for good.

An outstanding example of a BCorp is Rhino Foods, founded in 1981 by Anne and Ted Castle, a specialty ice cream novelty and ice cream ingredient manufacturer in Burlington, Vermont. I heartily recommend any potential new venture founders should at least look around their website to get a sense of how entrepreneurs are rewriting the rules of the economy—undercoming, rather than waiting for the politicians to come to their senses.

Inequality is a Choice

Founders of new ventures are fortunate to have much greater freedom to choose the way they lead and manage their enterprise, than established businesses, whose norms have become entrenched. Founders can simply declare that there will be a limit to the disparity between salaries at the top and bottom of the enterprise, or they can have a policy of no gender discrimination in salaries—and in doing so they are actually rewriting the rules of business.

Aristotle argued that the richest Greek should have no more than five times the wealth of the poorest person, and during the second world war, Franklin D Roosevelt proposed a maximum income of $25,000 (about $365,000 in today’s money) with a 100% tax on all income above that. Politicians have done very little to intervene since then, though Obama introduced the idea that big companies should publish their pay ratios. Progressive income tax policies are not vote catchers.

Greed puts the capitalist system in danger and is not a necessary ingredient of entrepreneurship. Indeed, chances are high that greedy founders will trip themselves up and find themselves alone. Pursuing the interests of all partners in the progress of the venture will pay off better, as well as contributing to the common good.

Economy for the Common Good

More and more businesses in Europe and Latin America are adopting the Common Good Matrix, version 5.0 of which is shown here: 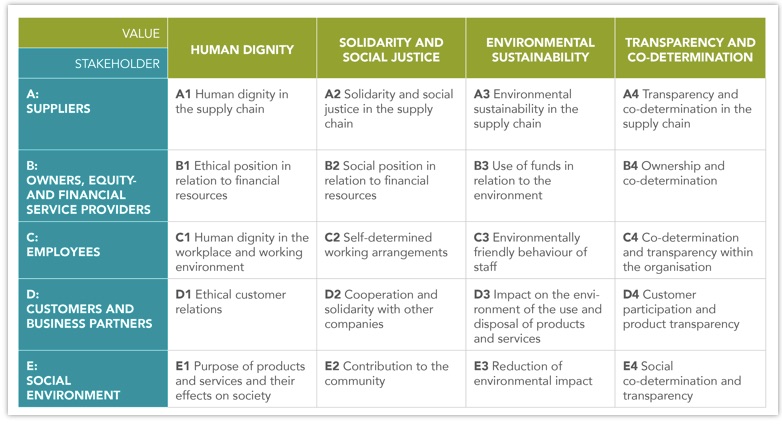 It is interesting to know that many founders build their ventures on the basis of the underlying ethical stance of the Common Good Matrix, without formally using it to evaluate the performance of their enterprise. For those who do want to build their business to embody this ethos, there is lots of help available (follow the link), including a balance sheet and more. The Common Good Matrix is one of a number of proposals for systemic change developed at Economy for the Common Good, based in Austria and now expanding across the world—and contributes to rewriting the rules of business.

The ‘undercoming’ of the system by action at the corporation level, like the BCorp or the Common Good Balance Sheet are underpinned by other organizations and nonprofits like the Next System Project, an initiative of The Democracy Collaborative aimed at bold thinking and action to address the systemic challenges the United States faces now and in coming decades.

Systemic change is also impacted by direct business action and also by nonprofits like The B Team—a nonprofit initiative formed by a global group of business leaders to catalyze a better way of doing business, for the wellbeing of people and the planet. As they say, “Civil Society alone cannot solve the tasks at hand and many governments are unwilling or unable to act. While there are myriad reasons we’ve arrived at this juncture, much of the blame rests with the principles and practices of ‘business as usual’.” These leaders, inspired by the BCorp movement, are committed to rewriting the rules of business.

These organizations are among many that see the deep and fundamental issues identified by Joseph Stiglitz and many others, and the need for us all to be committed to deep change towards inclusion and interdependence in explicit ways—creating an economy for the common good. However systemic change will not happen without each entrepreneur making progressive changes that they can within their own enterprises.

To help you consider your own entrepreneurial leadership and strategy, you may find it useful to read some other pages of this website: