Force Field Analysis Plot Those Forces That Restrain, and Others That Drive a Particular Course of Action

By Will Keyser
Posted May 3, 2018
In Benefit Venture Blog, Deciding, Tools
Force Field Analysis Plot Those Forces That Restrain, and Others That Drive a Particular Course of Action2018-05-032018-12-15https://venturefounders.com/wp-content/uploads/2018/03/logo-venture-founders-600w.pngVenture Foundershttps://venturefounders.com/wp-content/uploads/2018/03/logo-venture-founders-600w.png200px200px

Force Field Analysis: Kurt Lewin created a powerful strategic tool used to understand what’s needed for change in both business and personal environments. I have used it many times in both situations.

The first necessary step in undertaking a force field analysis is to define both the present state of affairs on whatever the issue, as well as the desired future state. You want to make both statements as precise as possible. This is quite tough to do, especially getting to an agreement on what can be agreed as the end objective of the matter in question.

When you have produced the two lists, you may find that the same forces appear in both lists; don’t let that deter you, though when you look at both lists, you may want to deal with any redundancies or overlaps. Occasionally the same force can be both a driving and a restraining force, with slightly different emphases.

With your edited lists ready, draw a force field diagram similar to the one on the right, but with the states and forces named. Obvious the purpose of force field analysis is to push towards the desired state of affairs. It’s almost as though you will be pushing the vertical line to the right. 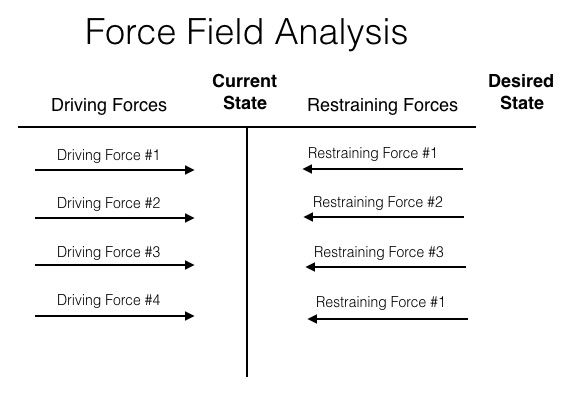 Next, work on the restraining forces first, and particularly focus on the ones that can be simply kicked out of the way by simple or inexpensive means. With the more intractable ones remaining, the list will seem less daunting and will become more manageable.

Amplifying the driving forces is trickier, simply because the decisions may involve cost, that could itself become a restraining force, so you may need to do the exercise iteratively.

Now, when the force field diagram is edited, you can start to set action priorities. You may want to use the Affinity Diagram to get a sense of which forces are the most urgent to tackle.

Force Field Analysis may sound to you like a subject for a physics class, but it’s a simple and fun process. Use Brainstorming to help you. You will probably find that you come up with more restraining forces than driving forces, at the beginning. That’s natural because our brains have a negative bias. Don’t be bothered by that; when you get to the second step of the force field analysis, you’ll also find the negatives easier to kick out of the way!