By Will Keyser
Posted May 7, 2018
In Benefit Venture Blog, Controlling, Tools
Variance Analysis Identify Reasons for Differences Between Expected and Actual Amounts2018-05-072018-12-22https://venturefounders.com/wp-content/uploads/2018/03/logo-venture-founders-600w.pngVenture Foundershttps://venturefounders.com/wp-content/uploads/2018/03/logo-venture-founders-600w.png200px200px

Variance Analysis: The monthly activity of comparing either/both of forecast/budget numbers with actual out-turn proved for me to be a really critical management task. It’s all about data for performance improvement. In my business, I used it mainly for two things: comparing sales forecast and actual sales, and budgeted profit/loss and actual numbers.

Other analyses were done as needed. For example, we could look at the sales pipeline forecasts that sales people did. Then we compared them with actuals to date, so that we could see how well we might catch up, if the actuals were running below forecasts upon which our numbers were based. Likewise we could apply the same principle to costs, or even individual budget headings

This kind of juggling was very helpful in reaching good conclusions in management meetings. The table below is very simplistic, but it will give you an idea of how to approach variance analysis. Of course your own situation will dictate which the factors are critical.

You can add further sophistication if it’s helpful. For example, the percentage variance may be more revealing in your circumstance than raw numbers. You will probably want to do your variance analysis on a monthly comparative basis in order to see trends. 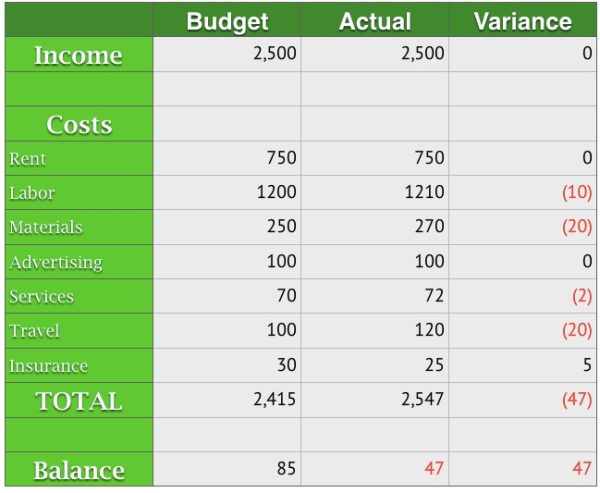 A Job for Management

Do NOT just leave the variance analysis to bookkeepers and accountants, though they will be instrumental in producing the data and maybe, even the charts. This is an essential management activity. Make sure that you analyze both the income and expenditure amounts: you can either raise the bridge or lower the water—or both.

Variance Analysis  enabled me to not only to see very easily where things were not going according to plan, but I found variance analysis amazing at starting the process of answering why. I used the Five Whys Technique to get to the bottom of problems to that we could take corrective action—in time. You’ll also find the Goal Tracking Tool helpful